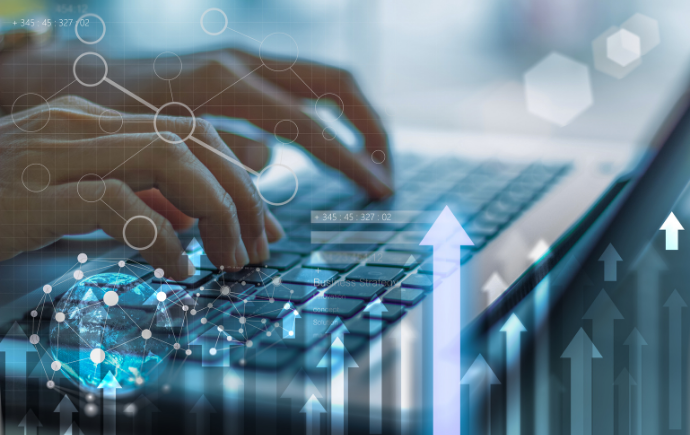 On Wednesday January 20th, over CxOs were present at the CIO Special: I-Strategy Rijk 2021-2025. At the initiative of our fellow member, the Ministry of the Interior and Kingdom Relations, we had an insightful and, despite the virtual environment, very sociable look behind the curtain of the Directory CIO-Rijk.

The event was initially planned as a network dinner but obviously due to the pandemic it was rescheduled into the digital world. Nonetheless, CIO-Rijk Lourens Visser and his colleague Rianne Blacquière, department head, provided us with an articulate and fascinating impression of the objectives and challenges that are present with regards to the government and digitalisation. The approach of the event was to give Lourens and Rianne the opportunity to present their I-Rijk plans and policies to their CIO-Colleagues. This in turn provided the present participants with the opportunity to gain insights into the future plans of the government body and to give their feedback on said plans. Resulting in an event interesting and relevant for both speaker and participant.

CIO Platform Nederland on the threshold from 2020 to 2021
Before we dive into the main event of the afternoon our chairman, Arthur Govaert, first kicks the event off by presenting some of the work and policies done by the CIOPN’s bureau and board. The message Arthur could tell was a positive one. The Platform is growing gradually and now counts 133 members. Furthermore, the external visibility of our association has increased, on social media too. Despite the pandemic there were many well attended events, in part due to the virtual nature. Our members miss the possibility to meet each other physically. Our wish is therefore also that, if guidelines permit it, we can organise more hybrid events. The CxO WhatsApp group has become an important place to meet and pose question to other colleagues.

The Focus of the CIO Platform Nederland remains on four central themes: Digital Strategy and Innovation, Transformation, Information Security and Vendor Relations. The primary task of the association also remains recognisable: to facilitate knowledge sharing. A new additional objective is to have more impact on our surroundings. That is why we opted for our new slogan: "In the digital heart of society’’. A striking example hereof is the cooperation with our European sister organisations, which have been working hard to genuinely affect politics in Brussels. As an industry we are not yet able to significantly oppose the lobby-machines of Tech companies, which has made us decide to hire consultancy firm Brabers. Lastly, Arthur emphasises that CIOPN will launch its own app soon. A secure space particularly suitable to share sensitive information. The place for quick communication will still be WhatsApp.

CIO-Rijk on its I-Strategy in the making
Next up are Lourens and Rianne. After quicky introducing his colleagues that also joined the event, portfolio holders of the topics to be discussed later, Lourens begins his presentation about the new I-Strategy of the Dutch Government.

Lourens’ department main objective is to guide and coordinate the different CIOs working at the level of the government. Ministries such as Defence and Foreign Affairs for example, but also administrative organisations like the Tax and Customs Administration or the UWV. Lourens, Rianne and their colleagues determine the vision and direction of digitalisation within the government. When determined, a translation into guidelines and conditions follows. Lastly, it is the CIO Rijk task to maintain and support the digitalisation. Together, these tasks constitute the content of the I-Strategy.

You would expect that the work at the ministries would slow down after the government falls, but that is not the case. Precisely because of the controversies at the centre of the government’s downfall (POK: parlementaire ondervragingscommissie kinderopvangtoeslag) there is even more work to do. The biggest challenge for CIO Rijk is that research shows that digital aspects have fallen behind within the government. On the one hand, this is because digital technologies develop in such rapid pace, that merely keeping up is difficult. On the other hand, IT does not appear to be a sexy topic for administrative authority and in politics. Moreover, there have been numerous budget cuts. The government fell mid-January due to the results of the POK, and with it extra focus was placed on IT, information management, and the provision of information to society and politics. In short, there is work to be done for the I-Rijk and it makes this an excellent moment to provide the ‘I-Strategy’ under construction with a push in the right direction. After all, the government’s I-Strategy affects all of us.

Before going into more detailed description, Lourens is eager to learn why other fellow members of the CIOPN apply an I-Strategy within their organisation. Via a mentimeter, the results appear on screen. The most popular answer is that an I-Strategy gives focus and stability when dealing with developments in IT: 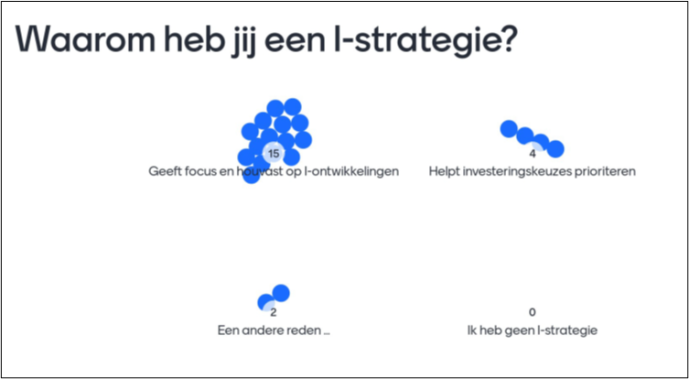 After a short round-up of reaction by the participants, Lourens explains some of the themes that the I-Strategy will focus on:  Societal challenges. Such as IT facilitating the government so that they in turn can work efficiently for citizens and business. This includes aspects such as security, privacy, transparency and a sustainable recovery from effects of Corona. By becoming more transparent, IT also contributes to a better democratic process. Namely, citizens and business are increasingly well-informed.

Within the I-strategy, three issues underlie the different themes:

Lourens has summarised the ten themes of the I-Strategy in a clear overview, which he calls ‘the wheel’ (see below). Each theme deals with the 'how, who and what', contains a roadmap and has a CIO from one of the ministries who helps develop the subject. A number of the themes will be discussed during this CIO Special.

Theme 'I in the heart'
The first theme concerning the issue of social value is bringing 'I in the heart'. CIOs often have the idea that the influence of digital technology truly reaches into the heart of society. However, for many managers this is not yet so obvious and the negative aspects of IT are often highlighted instead of the positive impact. An example of this is the discussion about the use of algorithms.

Theme 'Data and algorithms
Another theme concerning social value is ' more innovative decisions with data and AI '. This has a strong link with the new theme of information management and refers to the possibilities of bringing digital technology closer to governance. It is a very broad topic, says Rianne, which is relevant to all ministries.

Theme 'I-skills'
The final theme that Lourens discusses in more detail is 'I-skills' and how the I-Rijk can connect to the labour market. The goals here are, for example, to be able to offer the same training courses across ministries and to speak one language. The question here is how, despite the scarcity of IT professionals, you can (continue to) retain people with the right competencies

Regarding the second issue, Lourens discusses the theme of 'digital resilience', which he (reluctantly) gained experience with because of the Citrix issue. The lesson was that this aspect of government is still fragmented and would benefit from a partly more centralised approach. The vulnerability here also lies in the cooperation within and between chains. The digital cyber race requires attention and investment.

Finally, within the social task of realism in feasibility, 'working with the market and promoting innovation' is an important theme. The government cannot do everything itself, and Lourens observed that in some areas it is still difficult to work together, for example in the procurement of products. Experiences of other members in this area can help Rianne and Lourens to future-proof this important cooperation.

Break-outs
After the introduction and explanation of Rianne and Lourens it was time for the break-out session. In the break-outs, three of the discussed themes of the I-strategy Rijk feedback was asked. The file holders of each chapter are also connected to the event to provide additional explanation and expertise. By pressing one button, everyone was 'teleported' to the lobby of his or her chosen subject. Beam me up, Scotty! For the members, there is extensive recap available on the shared knowledge and experience for the participating CIOs.

Virtual drinks
After a fascinating half hour, all participants return to the joint call with the same push on one button. The various conclusions and recommendations from the subgroups are briefly explained and the initiators and participants were warmly thanked. Finally, it is time to end this successful CIO Special with a virtual drink. To increase the enjoyment, a package of drinks was sent to all participants in advance. Despite the virtual environment, the atmosphere was pleasant as ever and many ambitions and frustrations of the CIO profession were discussed.

Our special thanks go to Lourens, Rianne and their colleagues at CIO Rijk. It was a pleasure to be able to work together. We reflect on a successful event where both speakers and participants gained many new relevant insights. Once again, we would like to thank everyone for their efforts and presence, and we look forward to the next CIO Special!