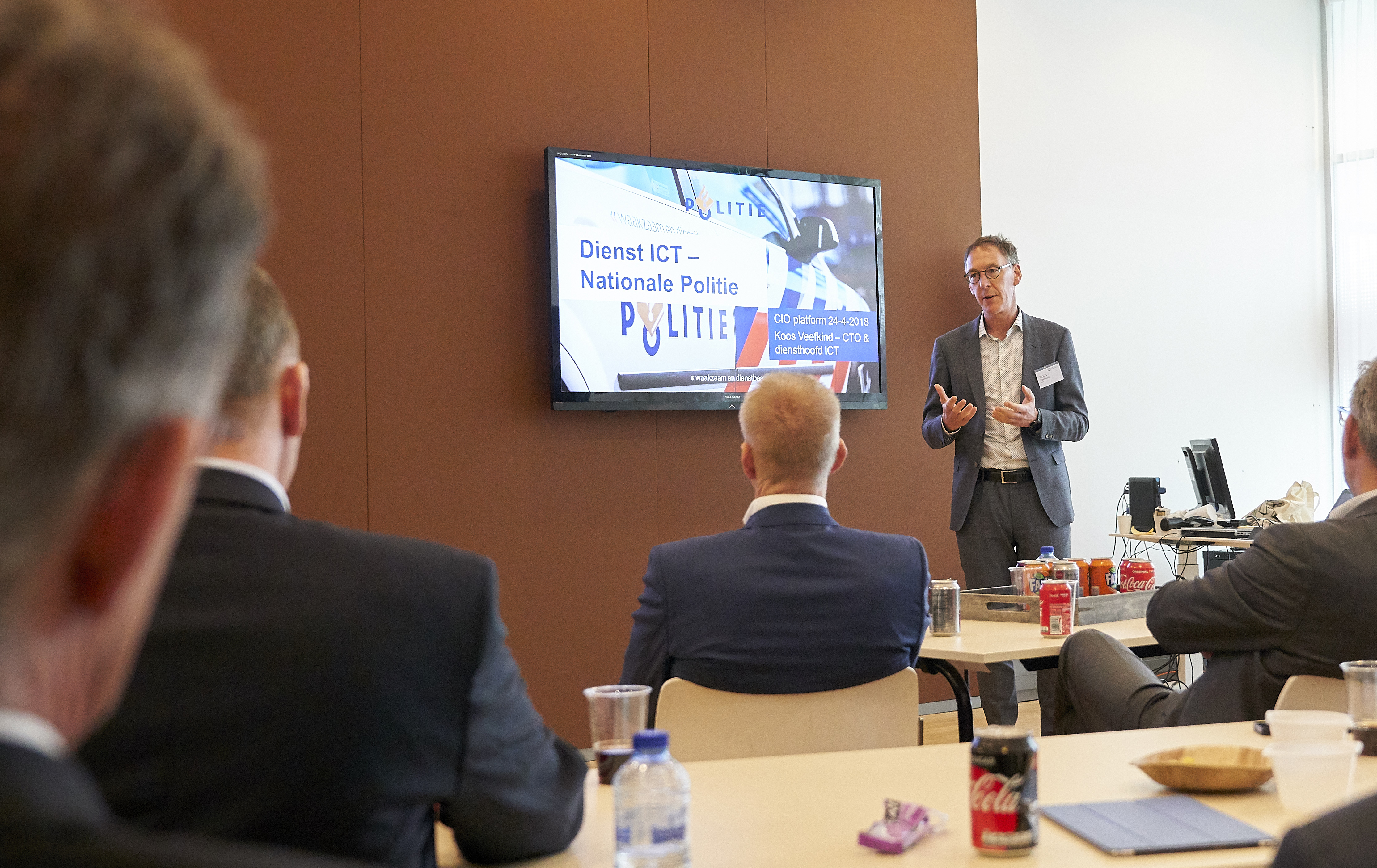 On Tuesday April 24th, we were welcomed at "De YP" as guests of Koos Veefkind, Head of Department ICT at the National Police. The enormous diversity of the police organization was presented this afternoon, where changes are continuously on the agenda.

We started the afternoon with a General Meeting part, with updates from our association: Proposed board changes, priorities from the bureau and the explanation of the annual financial report for 2017 were discussed with the members present. All those present unanimously agreed to let Teun van der Vorm (CIO ANWB) join the board. Attracting new members and the new look and feel of the corporate identity are subjects that will be frequently brought to the attention in the coming months.

After this, the attendees were invited for a tour through the multifunctional building "the Yp". This offers facilities for the Unit The Hague, but also the control room - on the 12th floor - together with the Fire Department and Ambulance are housed here. In addition, this building houses various sports halls, shooting ranges, a covered practice street and also a training center. Great to see how technology and training go hand in hand!

Koos Veefkind then made us part of the digital transformation within the police and told us about the Attack Program for Information services and the changes that have all been set in motion in recent years, building on the introduction of the National Police. The basis of this program is the generic putting in order of a central IT function in which uniform cooperation is facilitated for the entire organization. This rationalization and a decrease in the number of Prio1 incidents by as much as 90% have laid the foundations for further expansion and improvement. The police is working hard to optimize and improve work processes and services using sensor technology, apps, process automation and Big Data. A great achievement for a large government organization (67,000 users) that carries out everything under its own management 24/7, with a diversity of digital wishes!

In order to be able to anticipate the changing demand at the police, the "Production House" has been set up, as Marjolein Smeets (Deputy Head of ICT) explained. They are working closely together in this production house for the entire application landscape, with the aim of rapidly carrying out the developments. The following are the ingredients of success: 1) Clear purpose; 2) Agile & lean way of working; 3) Accelerative leadership; 4) Masterful use of resources; 5) Adaptive people. Marjolein stimulated the CIOs present, causing a lively discussion.

Another success is the new app that is available to all agents on the street. Namely the MEOS app: "Mobile more effective on the street". Olof van der Ziel, an agent and Product Owner, explained in a practical way how this app connected the "IT and the field". By literally allowing developers to patrol and to experience the practical situation, a nice base has been realized that led to this app. One of the most important results is the design of nationwide uniform processes; making working safer, faster and more effective. Agents really feel helped with the "on the assembly line" delivered improvements.

A final contribution from the police was given by Caroline Sanders. As head of the High Tech Crime department, she showed how cybercrime is being tackled. She explained the involved entities with which, for example, the Skimming practices have been smothered. By setting up Public-Private partnerships, damage is limited. Good results are achieved with good agreements, common goals and mutual trust.

During the dinner we talked about everything seen and heard during the afternoon. A reaction after from one of the CIO’s: "This afternoon we had a very inspiring CIO Platform Netherlands meeting at the #Productiehuis of the Police-ICT." Thanks to Koos Veefkind and Marjolein Smeets for the interesting presentations and insights into the approach. We are happy to join in!"