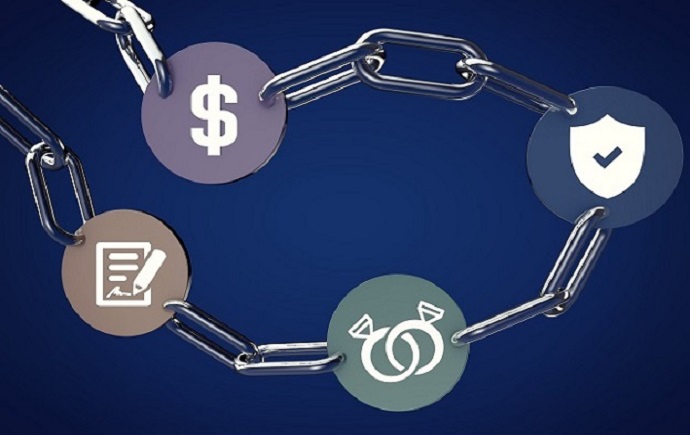 Minister Kamp of Economic Affairs has received the Agenda for action from the National Blockchain Coalition today. The agenda is a jointly initiative of more than twenty organizations from logistics, energy and finance, as of knowledge parties and governments. With this agenda, the Netherlands will be a frontrunner internationally in the application of blockchain technology.

Working safely and efficient in a wide network
Blockchain technology can make it possible to – without the intervention of a third party – execute guaranteed correct digital transactions. In this way, wide networks of suppliers and customers can safely and efficiently work together. As expected by the founding partners of the National Blockchain Coalition, this can be of great influence on power supply, financial services, logistics and – in time – healthcare. The coalition foresees positive effects on the autonomy of citizens, transparency of transactions, cyber security and decrease of administrative workload.

Minister Kamp of Economic Affairs: “The promise of blockchain is a far more secure exchange of digital information. It is great to see that Dutch companies, knowledge parties and governments are gaining experience with the possibilities of this new technology so early on. Blockchain can change the way we do digital payments or exchange data, but also make it easier and safer. For the Netherlands to be a frontrunner with the application of innovating technologies, our knowledge economy will stay progressive and of world level. And that will supply jobs and revenue.”

Although the National Blockchain Coalition expects large and rapid changes, similar to the rise of the internet, René Penning de Vries (arch image Team ICT) states there still is a lot to be done before the technology is ready for use at a larger scale: “Development and introduction of blockchain asks for a coordinated approach of challenges by parties from many sectors. If the Netherlands can seize the opportunities there are in this pioneering stage, we can be a frontrunner of the world in the area of blockchain.”

Actions
The Agenda for action firstly targets itself on the development of so called digital entities, with which people, objects and legal parties can execute digital transactions as part of a blockchain. Also the coalition is working on solutions in the area of legislation and acceptance. For the development of knowledge, arrangements are made about education, sharing knowledge and enhancing skills.

Public-private knowledgde sharing
The National Blockchain Coalition is a cooperation of governments and companies, among which are ABN AMRO, ING, De Volksbank, Nationale Nederlanden, Port of Rotterdam, Enexis, Alliander, de Royal Dutch Association of Civil-law Notaries, Brightlands and the Ministries of Economic Affairs, Infrastructure and the Environment, Security and Justice and the Interior and Kingdom Relations. From the knowledge side, the TU Delft, University of Tilburg, Radboud University, national research institute for mathematics and computer science, NWO and TNO are joining. The social aspect is contributed by ECP | Platform voor de InformatieSamenleving.

One of the coalition partners of the first hour is ABN AMRO. Head Innovation Centre Arjan van Os about the importance of sharing knowledge: “Blockchain plays an important role in the strengthening of the trust in the world of digital transactions. This technology carries a positive effect for the efficiency of the organizations who are working in the field of finance.” The formation of the National Blockchain Coalition is an initiative of Team ICT (posed by the Ministry of Economic Affairs), in which the CIO Platform Nederland is represented and is one of the actions of the Digital Agenda from the cabinet to accelerate the digitalization of the Dutch economy. More information about the coalition and an overview of partners who are participating: https://www.dutchdigitaldelta.nl/blockchain.

More about Blockchain
Blockchain is a new technology and way of working for a save exchange of digital data and transactions. Abuse is difficult, because every transaction is checked by multiple computers and is completely transparent, without the intervention of a third party.