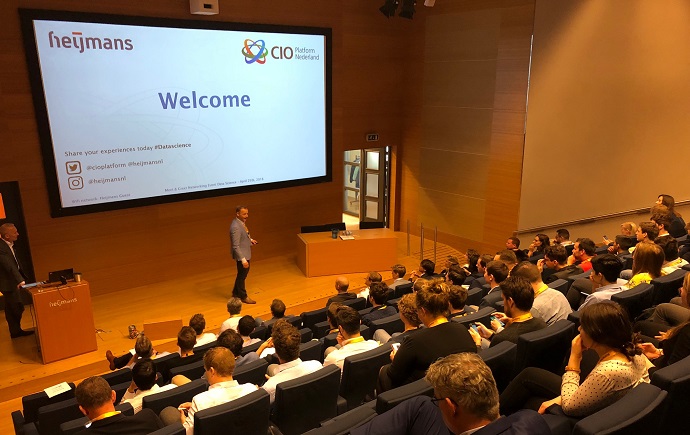 On Wednesday April 25th the first data science Meet & Greet networking event took place. 13 members of the CIO Platform Nederland introduced more than 50 data science students in an original and creative way into the daily practice of data science within a large corporate.

"The event has exceeded my expectations."
"I have gained valuable contacts."
"What a good energy!"

Just a few of the positive comments of the participants which we received during and after the data science Meet & Greet. The students were amazed about the wide employability of data science within the various organizations. That there were 'real' data scientists on stage was particularly appreciated by the students. The event was hosted by Heijmans in their well-equipped auditorium at their head office in Rosmalen. The programme was put together in such a way that the students and members of the CIO Platform Nederland could get to know each other better. During a 10-minute pitch of each organization, students could explore the versatility of data science in practice and meet a possible future employer. The members of the CIO Platform Nederland had the opportunity to get in touch with the young professional data scientists of the future. During the break between pitches and during lunch time the opportunity was there to network, ask questions and deepen the contact.

The following members of the CIO Platform Nederland have taken care of a dedicated pitch: Akzo Nobel, Alliander, CZ, de Nederlandsche Bank, Heijmans, Heineken, LUMC, Radboudumc, Rijksoverheid (national government), Royal IHC, Shell, Transavia and Wehkamp. During the pitches, students received answers to the the frequently asked question; "What exactly can I do within an organization when I finish my data science study?" All creativity was put into place by the participating companies to give the students a good idea of the application of data science in daily practice. This allowed the students to get an idea of the average working day of a data scientist and to create an impression of the culture, atmosphere and work environment within each organization. We look back on a very valuable meeting where the mutual acquaintance between our members and the students was very successful!

The impact of data science In several presentations it was highlighted that the job and application of data science has impact and that as a data scientist you can really make the difference within an organization. For example, during the 13 pitches it was frequently mentioned that data scientists could add much value to the business processes and the realization and improvement of products and services. With the focus on surpassing the expectations of the client, the customer, the citizen or the patient, a data scientist can deliver very meaningful work. The participating companies showed that data science plays an important role in various places within the organization. That the discipline isn’t only data became also very clear; alignment with colleagues from a variety of disciplines is essential in order to effectively achieve the results and application possibilities of data science. The practical side of the application of data science (pitched during the event by ‘real’ data scientists) combined with information about the atmosphere, culture and character of the organization, was greatly appreciated by the students.

Next edition
Because of the enthusiasm of the members of the CIO Platform Nederland and the positive feedback of the students, we intend to organize a similar event during autumn again. If your study association is interested in working with us, please drop us an e-mail at info@cio-platform.nl.

View a short impression of the Meet&Greet: